What’s next for Fatbot Games?

On behalf of the whole team, let me wish you all good health and stability in this unstable and dangerous time. We highly appreciate the effort and sacrifice of the people fighting the virus, and we also feel for those whose health and/or living have been compromised by the pandemic.

The situation in the last few months has been very serious, including in our own country which is in the top 10 most deaths per capita in the world among countries with a population of over a million people, and so we are very grateful that no one in the team nor any close relative of ours has fallen ill. Thanks to that, we could work more or less undisturbed and release our second game in September of last year (2020).

Our Second Game is Out!

Vaporum: Lockdown, released on September 15, 2020 on Steam, GOG, and Humble (Windows, Mac, Linux), is the second game of our small indie studio. Much like the first Vaporum, Lockdown is also enjoying positive reception in the community. We have received a great response in the form of forum feedback, reviews, and also direct personal correspondence. We are very humbled and thankful for all that! 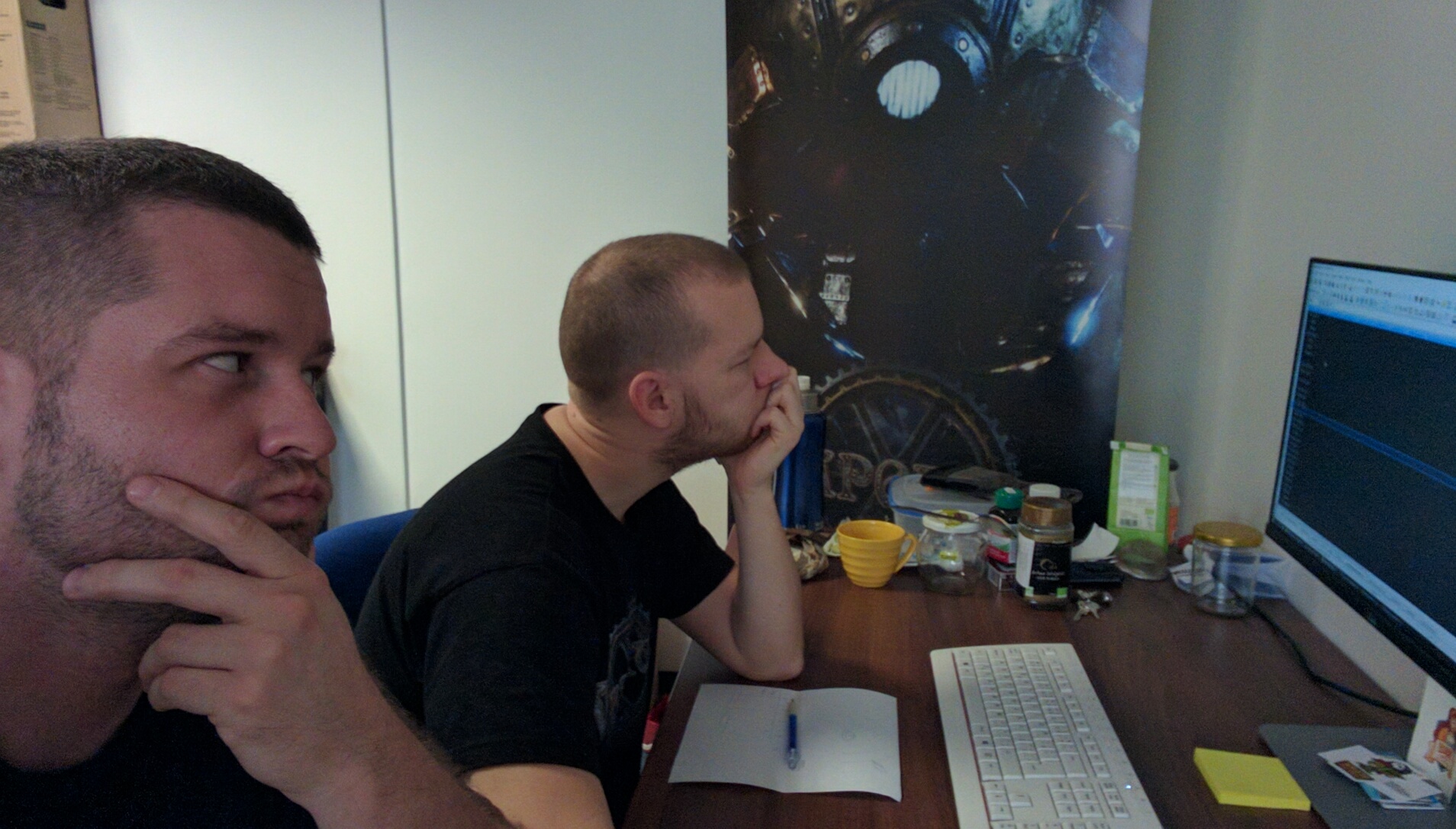 Matej and I, trying to come up with cool RPG mechanics.

Both games are a labor of love and so we really appreciate any kind of feedback — be it praise or constructive critique. We have learned a lot in making both games, and apart from being able to make ends meet doing what you love, the experience itself is the most valuable thing we have gained.

Lockdown also released on Switch on March 22, 2021, and we are happy to say that the port has turned out well! Our decision to port the game ourselves proved to be correct. We had to overcome heaps of issues in the obstacle-ridden publishing process of Nintendo, but it paid off! 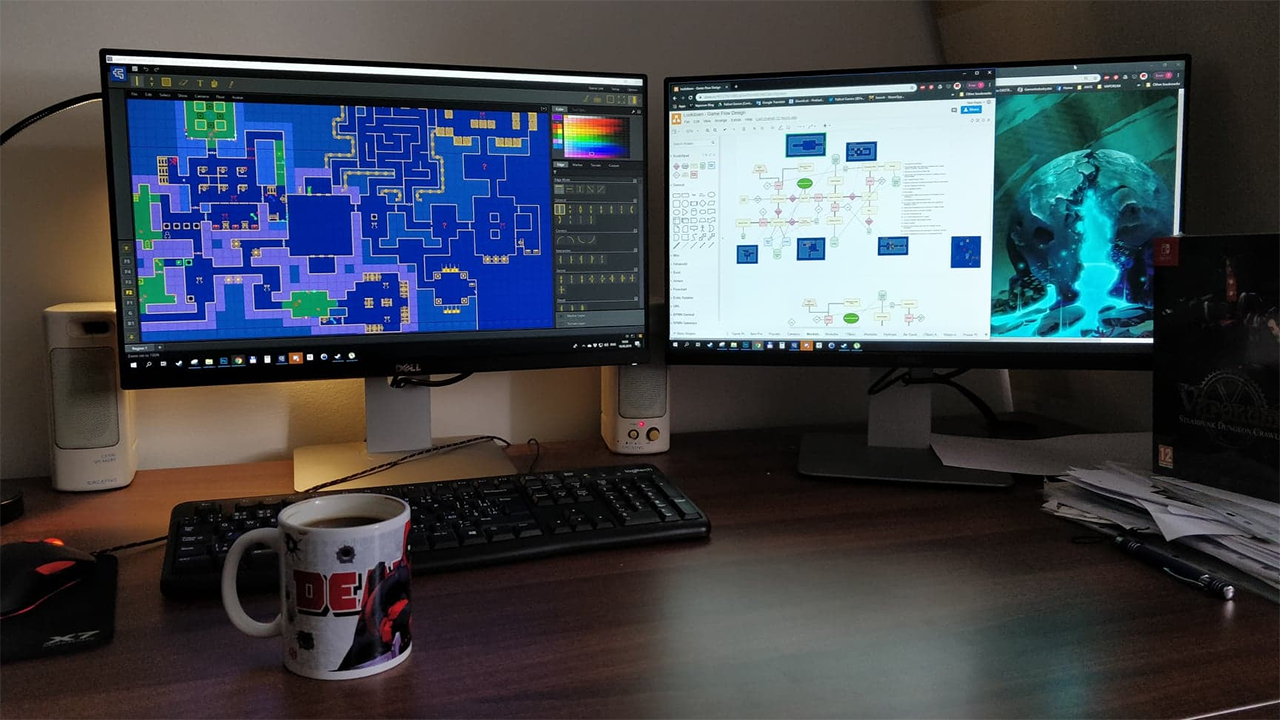 When designing levels for Vaporum: Lockdown, we built upon what we had learned in Vaporum, using the best parts and avoiding the mistakes. At least that was the plan.

We had full control over every aspect of the port the whole time and were able to pack in more quality than before (when previously using a 3rd party to do the job). Apart from the obvious font size increase, there are plenty of quality-of-life improvements in the port, most notably a heavily streamlined control scheme. The game is a breeze to play on Switch now, and we all enjoy it even more than on PC, which is a big claim for us “PC dinosaurs”. (Well, one member still prefers playing on PC, but he’s a “PC protomolecule”, so that doesn’t really count.)

We were able to improve the performance significantly, which allowed us to get more high-end effects & visuals into the port for those eye-candy treats.

We are thankful for any feedback you give us on Vaporum: Lockdown, be it the desktop or the Switch version. Whether it’s a praise-talk or an earful, be sure to give it to us on any of our social channels or e-mail. We know all too well it sounds like cliche, but those of you who have had direct contact with us know that we actually do take your feedback into account.

An End of an Era…

“The Age of Vaporum”, as I like to call it, was a time filled with hardship and trials, but also of some success. You could call the founding of the studio itself a success, which would not have been possible without our investors, today close friends, Richard and Oto, who never doubted the abilities of the team. The way we got to know each other is pretty curious and I tend to mention it in every interview about the studio. 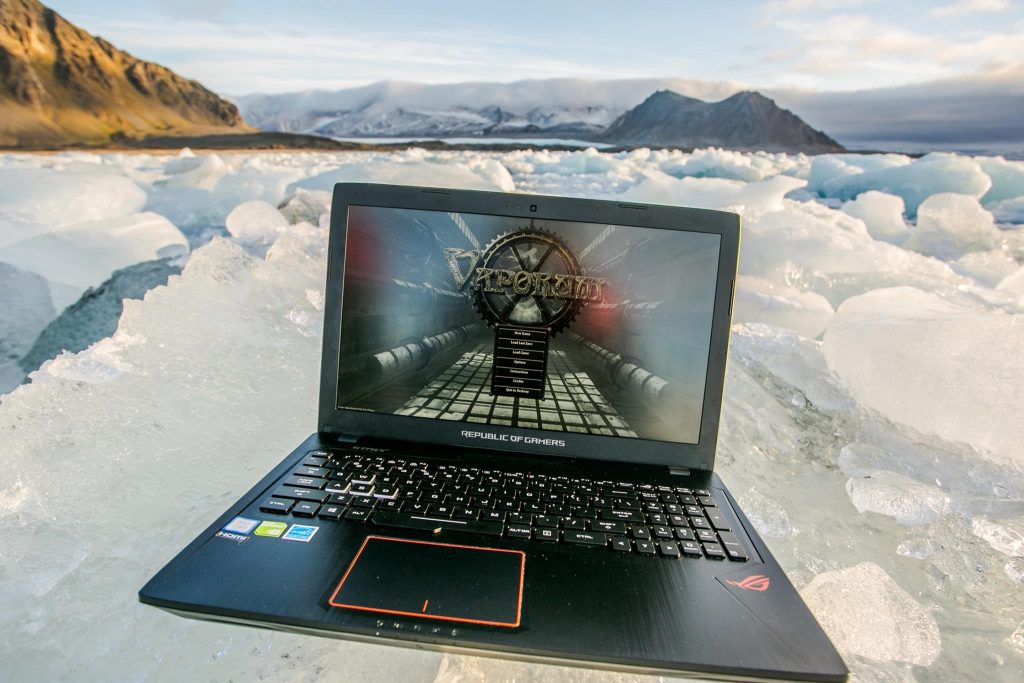 Our game was even played at the North Pole! Mateusz Mandat, our friend stationed at the tip of the world, sent this unique photo to us.

Although the journey was often hard and tricky, we always treated all the slip-ups and failures with introspection, even though sometimes we had no control over the situation. Today, we see ourselves at the start line, naive dreamers who, on the one hand, had some skill, willing to learn and adapt, and on the other hand, had a lot of luck above all. Thanks to this luck, our failures didn’t cost us our heads, and we are still here. 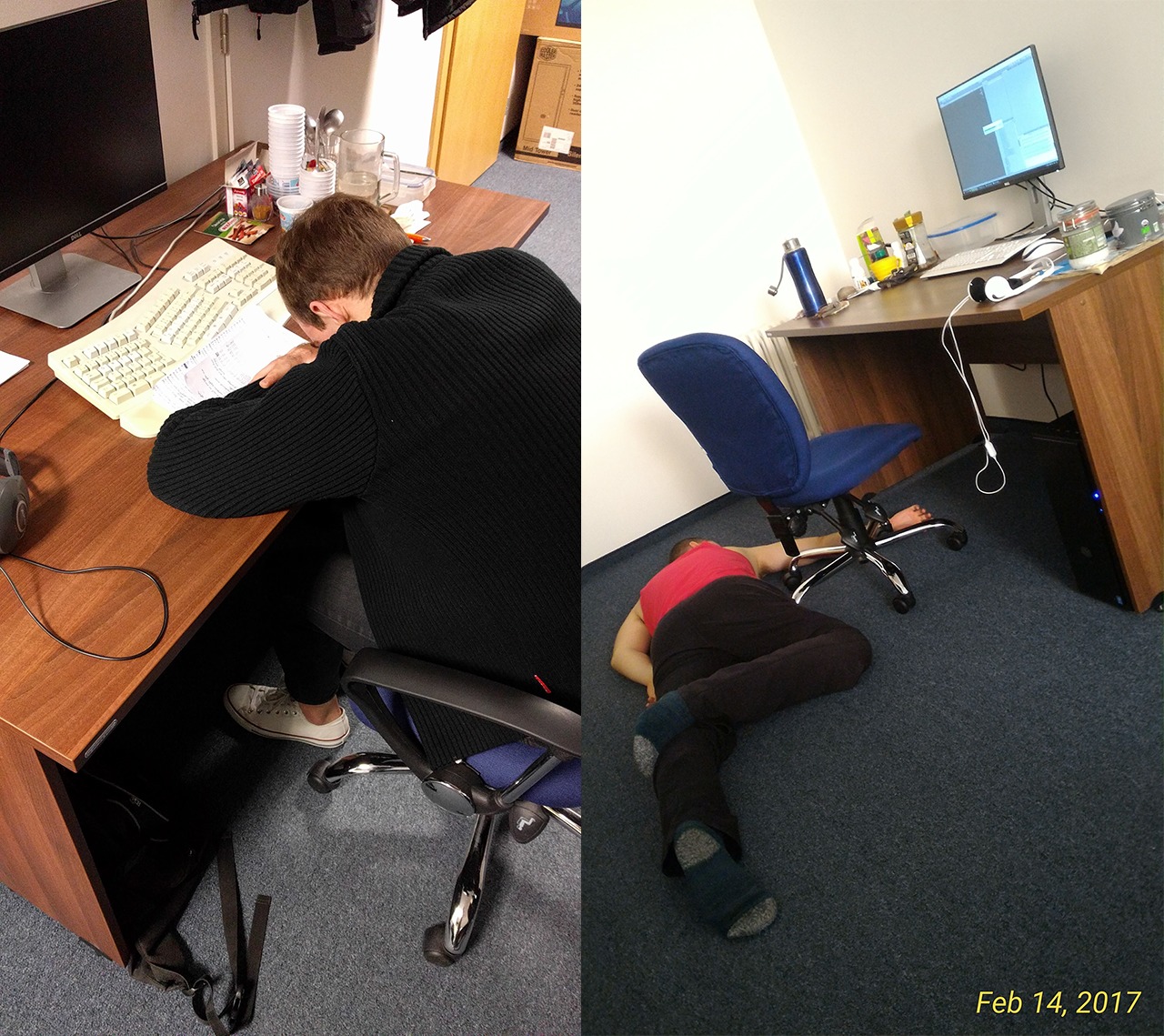 Game dev is demanding, especially indie game dev. We were always hard at work, and it drained us quite a lot – especially during holidays.

We set out on this indie-dev adventure thinking we knew what we were doing, but there was soooo much still to learn. Since all the ups and downs and experiences are so numerous, we might rather share them in a separate series of blog posts someday.

What’s Next for Fatbot Games?

Now, we have to consider our future with sober eyes. Sure, we could just keep making dungeon crawlers for the small group of hardcore fans of the genre, and port the games to all the platforms, but unfortunately, that is not sustainable. Our beloved DC genre is too niche and we would be too reliant on the “buying discipline” of the fans, which would still not ensure paying for the costs of the production — trust me, we learned our lesson with both games on this.

The production of Vaporum, with all the goals we had set for it, was a Herculean feat. The number of things that interact and affect each other in a game like that is simply too large to tackle in such a small team without cutting a lot of edges and thus lowering the final quality. 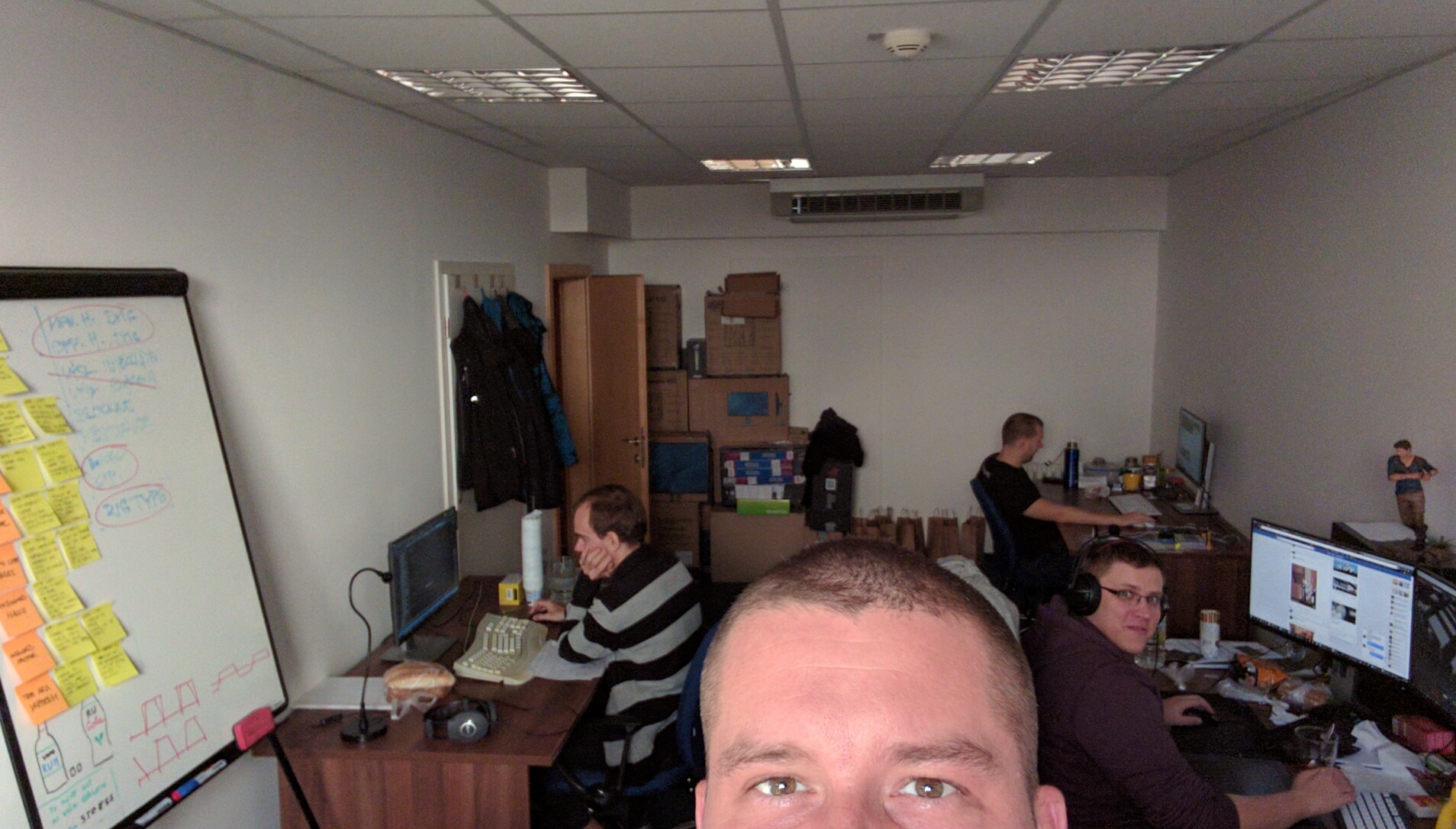 This is what indie gamedev is to us. No fancy offices or buffet three times a day; it’s just hard work, but in a team we wouldn’t trade for anything!

Still, to fans it might seem that despite the miniscule team, the result was pretty good in the end. Maybe, but at what cost… Vaporum cost us a lot of overtime, mainly for level makers and level designers. Every part of the game was more demanding than our team was able to handle in an optimal and timely fashion. We went into an oxygen debt, not only in the amount of overtime, but also in the extra resources that it took. And of course, every debt has to be paid off. But we did not. Was it not for Richard and Oto, our more than fair and amiable investors, we would not be here today.

It was high time to change the course. We dusted off an old idea that had lingered around since the early days. The idea crystallized into a concrete concept in 2019. In the form of a video and pitch deck, we confirmed the viability of the project by pitching it to various parties at various events. Since the feedback was 100% positive, it was pretty clear what the next major project of our studio was going to be.

Right after releasing Lockdown in September, while still making patches for it and doing post-release PR, we started working on the prototype. Along actively porting Lockdown to Switch, we were able to create a final prototype in early March, and then we put it to the test — the focus-test.

These days are all about important decisions. In what form will we release the game, how will we finance it, and when is the best time to officially announce it… All this amid working on the remaining ports of Lockdown (PS4 & 5 and Xbox) and shifting our full production to the new game.

It’s a very strange time. And very exciting! We can’t wait to announce the game to the public and see the reaction from you, our fans! We will appreciate any kind of support, sharing, commenting, or even just liking the post.

As a small hint, the name of the protagonist of our upcoming project is hinted at in the super secret room in Vaporum: Lockdown. Can you find it? 🙂