In today’s post, we’ll take a look at how Vaporum’s levels will be structured in terms of linearity and optional content, and we’ll also delve into the RPG side of things.

Levels will contain a lot of optional content with a good amount of loot, weapons, gadgets and surprises. You do not have to explore all these areas, but you can. It’s up to you.

Although levels are created manually by hand, we plan to introduce randomly chosen physical blockers (like a pile of junk or indestructible crates…) at certain points. This will change the way you have to go through the level each time. It will make some passages impassable, while open up some others that are impassable by default. This will never completely block off a certain part of a level; it will only make that part accessible from elsewhere. These blockers will be randomly turned on or off when you first enter any given level. As a result, chances are you will never play any one level the same way. We see this as a very cheap way of increasing re-playability, making the game a bit more interesting even after many playthroughs. A similar concept is used in Grim Dawn. 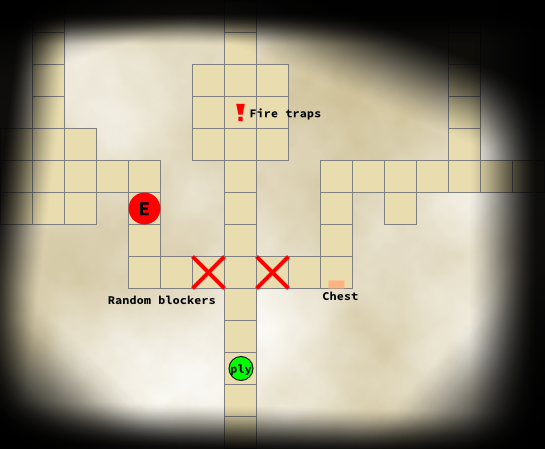 Loot (items you find in chests or dropped from enemies) is also randomized, to an extent. When you first enter a level, most chests in it have their contents randomized. Items will still be carefully defined by hand, but every playthrough will yield different combinations in different places.

In Vaporum, you can carry one melee and one ranged weapon in your hands. Ranged weapons have great firepower at the expense of long reloading time. This makes them very strong, but not usable every other second, like you would expect in most crawlers. Ranged weapons therefore represent an occasional huge damage spike rather than a constant damage source. Melee weapons (like swords and hammers), on the contrary, have short cooldowns and can be used very often.

Character customization comes in the form of upgrading your suit. Everything revolves around your suit, as instead of upgrading your character’s attributes and skills, you are upgrading the suit itself. The suit represents what is generally regarded as the player character in most RPGs. It protects you from harm, allows you to install various gadgets to enhance your abilities, acquire skills and increase your statistics. The simplest way of getting stronger is to equip gadgets. Gadgets are items you can find in chests, secrets and sometimes dropped from slain enemies. You can equip as many gadgets as your suit can sustain (up to a maximum number of slots). Slots are not limited to certain types of gadgets, so you can have any gadget type in any slot. This is one of the defining features of our character system, giving you a lot of room for experimentation with various builds, combos and whatnot.

Experience comes in the form of power cells. As you collect power cells (dropped from enemies or found), your suit’s power capacity increases, allowing it to sustain more gadgets. Every time the power increase reaches a minor threshold (equivalent to 1 character level), you gain minor attribute bonuses (like more hit points, more attack damage, etc.). And when the power increase reaches a major threshold (equivalent to 3 character levels), not only do you gain these minor bonuses, you also get to choose one from a set of predefined skills (usually passive skills) that have a significant impact on gameplay and the way you can play. This choice is very important, as you can only choose one skill of the set and the rest is lost. 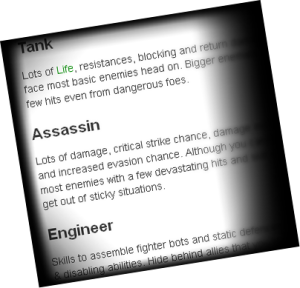 Do you want to be an armoured hulk and just face-tank most enemies, or a light-footed assassin that deals quick bursts of damage, evading counter-attacks, or an engineer who can hack devices and assemble bots to do the fighting for him, or something in between? The choice is yours.

Let us know what you think about our vision of the game in the comments below.